The best bike to own is the bike that gets you out to the adventure that awaits you where the trail winds and falls in rhythm with the landscape.

Few bikes in history have been as iconic or even as notorious as the Specialized Stumpjumper. There was a time in my life when I would do just about anything to get my hands on one, but the bike always seemed to be out of my grasp. The pursuit of the Stumpjumper has lead me to ride some great bikes from Giant, Proflex, Univega, and yes, Specialized. Not a single bike I have ever owned has left me with any remorse on the trail, as there could ever be such a thing, really, honestly!

The best bike to own is the bike that gets you out to the adventure that awaits you where the trail winds and falls in rhythm with the landscape, and you get to choose from a nearly endless stream of choices in real-time. Although, there was that one time on that Scott Genius! Even now, when I talk to people at the bike shops and out on the trail, we agree that the Specialized Stumpjumper is a capable bike. But, which one do you choose? The Stumpjumper 650B, The Stumpjumper 29 or the Stumpjumper 6Fattie? Well, you are in luck! Today you get to learn about the Specialized Stumpjumper Comp Carbon 6Fattie. But first off I need to mention that I am not being paid by Spesh to write this review, The bike was not given to me by a Specialized dealer, and I have not been strong-armed into writing a positive review by those brutes over in Morgan Hill. I dare say, I have become just a little obsessed with the Specialized brand through years and years of riding their bikes. I am not apologetic about that in the least! 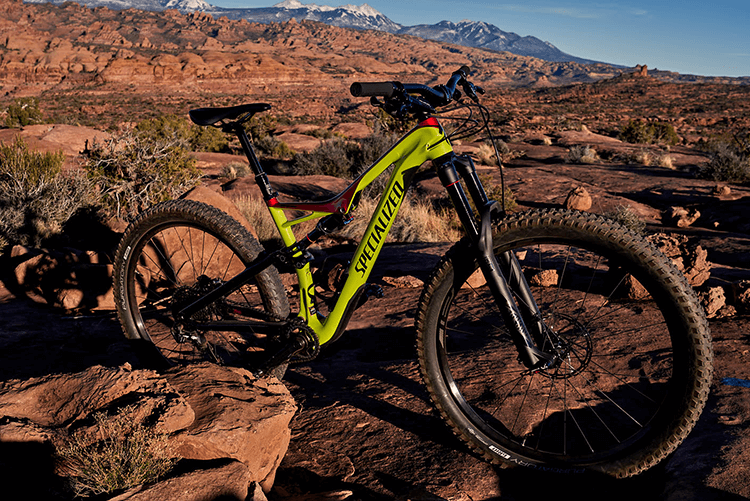 I first rode the Specialized Stumpjumper comp 6Fattie at a demo day in the wet up in Coeur D Alene Idaho. It was fall of 2015, and Two Wheeler Dealer had a crop of Specialized Fatboy bikes and 6Fatties that were just being introduced for the model year 2016. The 6Fattie on hand was the aluminum Stumpjumper FSR Comp 6Fattie and I tested both bikes back to back.? I fell in love with the 6Fattie in mere moments after I started down the trail! Where the Fat tire bike would become buoyant and sketchy in the deep puddles, the 6Fattie wasn?t even bothered by them, and it climbed surprisingly well. There was just one problem. I had already bought a new 650B Enduro, and I couldn?t buy a 6Fattie, could I? But still, I left with a grin and an awesome day of riding. The bike was smooth, stable, and seemed to float across the wet roots and dirt with ease.

The second time I got a chance to ride a 6Fattie was at Outerbike last year in Crested Butte where I?test rode the brand new 2018 Epic. After a few hours of riding the new 24lb 2018 Epic Pro there just happened to be a small S-Works 6Fattie that was turned in. I immediately pounced on it! If you have never been to an Outerbike event before, you should put it on your bucket list. If you haven?t heard about it before it?s a huge demo event where you buy a ticket that allows you to ride any bike available from around 20+ dealers. The event ticket covers the lift passes, lunch, and bear garden for 2 of the three days! The S-Works Stumpjumper 6Fattie had me grinning from ear to ear at the bottom of the first lift-served descent. I ended up flying around a right-hander into a narrow rock garden section of single-track lined with aspens on the Avery trail and got bumped off my line. As I was perched on the edge looking down a steep tree and brush strewn slope, I needed to calm myself and the bike down. After grabbing a handful of breaks and doing a bit of a track stand, I turned my front tire back towards the safety of the trail, moved my weight to the right and, calm as could be, flowed right back onto the trail again. The bike fosters confidence and flows in a smooth rhythm that leaves you breathless at times through sheer exhilaration. 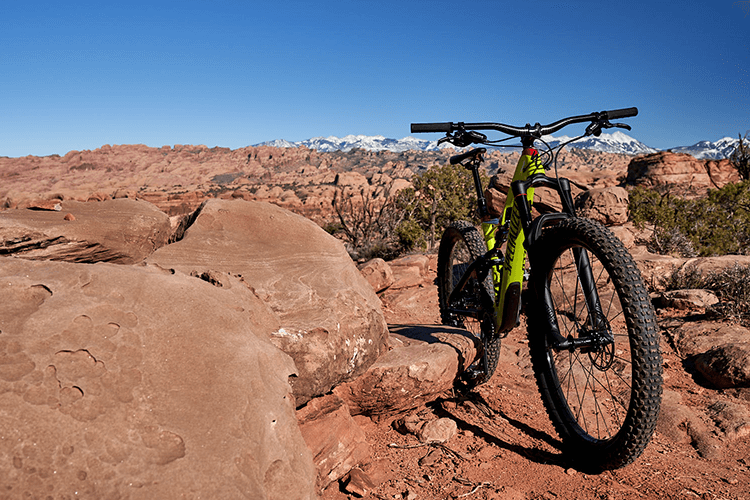 After Outerbike, I went to my local Specialized Dealer, Epic Mountain Gear in Frisco Colorado to see if they had one in stock. They just happened to have a 2017 Specialized Stumpjumper Comp Carbon in size medium, but I ended up not getting it at the time because the price and frame size were both an issue. At 5 foot 6 I am on the lower edge of the medium frame recommendations, but it is my personal preference to ride small frames. My brother on the other hand, at 5 foot 10, is right at the upper end of the medium frame size so it would work for him. I had been talking to him and others about this bike for the past few years, and he became interested. It was his Rock Hopper back in the ?90s that got me sold on specialized bikes, so in February when I had the cash, I found that the bike was still at the shop at a discounted price so I picked it up for him.

Naturally, I had to take it to Moab for a few days and test it out before I delivered it to him. Website content and all that! I had a blast! I rode the Amasaback Trails the first day I got there and finished off with Mag 7 on the 2nd day. On the Hymasa trail, I got a PR with this bike on the Upper Hiamasa climb in Strava which surprised me because it was my first ride of the season. It’s not a cross country race bike on the hills, but it is easier to climb with than my 650B Enduro. With a 650b inner wheel diameter and 3-inch-wide tires, it brings a girthy 29-inch diameter to the trail. The wide tires are designed for low tire pressures from 12 to 23 PSI which create a smooth ride over rocky terrain and climbing traction you will have to experience to believe. With the constant diversity of rock in Moab, I rode with the tire pressure at 20lbs both front and rear, and I did not have any issues with smacking the rims on the rock due to low tire pressure. With the 6Fattie or any other plus-sized bikes, tire pressure matters although I don’t ride fast enough for the suspension and tire pressures to get out of cohesion and become dangerous. It is important to note that the potential is there and the folks over at Teton Gravity Research have an excellent article going over the best tire pressures for your weight. 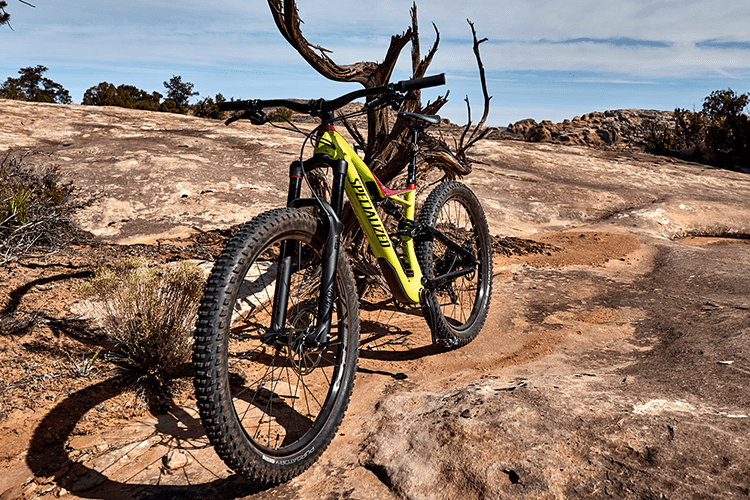 The GX drivetrain paired with the Guide R brakes extended my confidence level with this bike and never gave me any issues. The only quirk I did find was with the bottom bracket height. At 325mm I found myself smashing my pedals occasionally on step-ups and technical rock features. This is a common issue with all sorts of bikes and not a drawback of the 6fattie. The low bottom bracket lends more to a snappiness and race like feel when turning or making quick adjustments. The Rock Shox Yari was well composed and held any line I wanted like a champ. The auto sag of the Rock Shox Monarch RT was a breeze and made setting up the rear shock quick and easy. Specialized includes a tube inside a protective wrap and a small tool roll, sans tools in the SWAT compartment in the down tube. I find this storage option a welcome way to take advantage of underutilized space and a reason to leave the pack at home for days I will be hanging close to home. 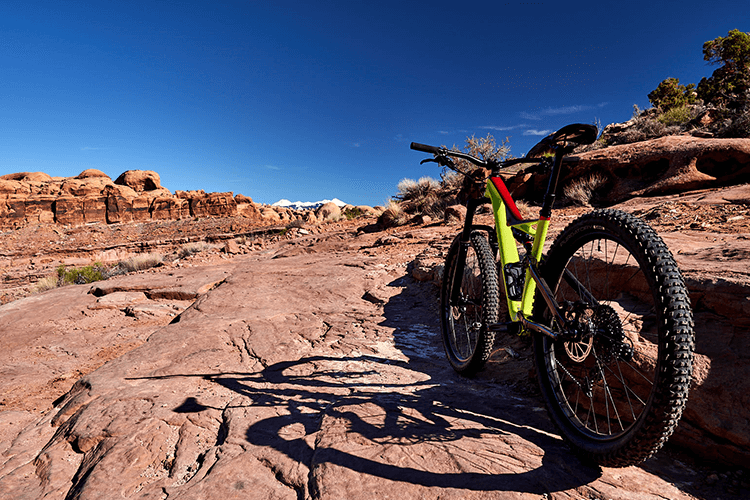 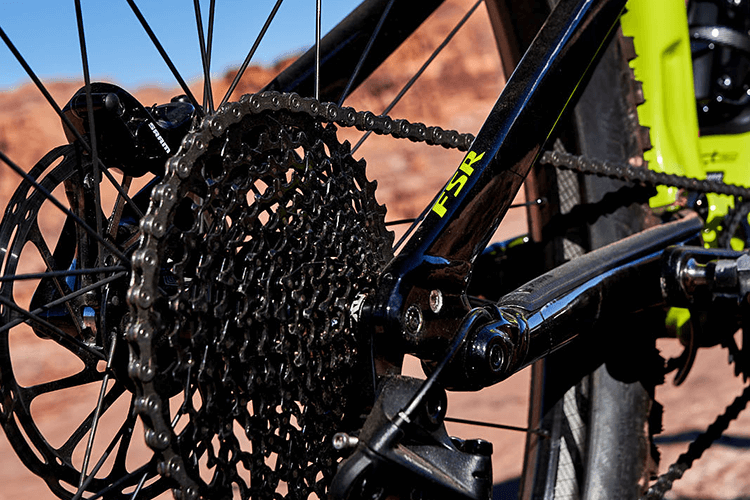 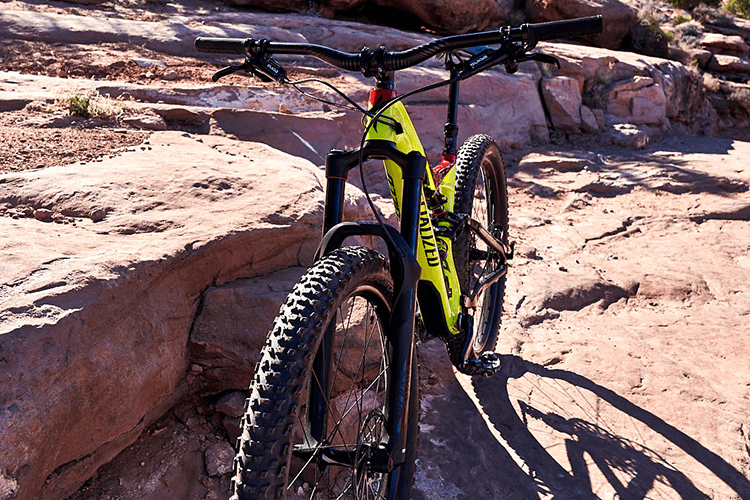 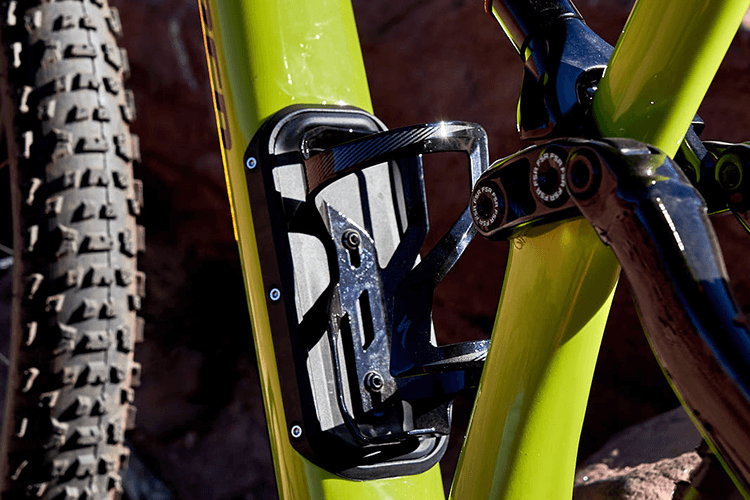 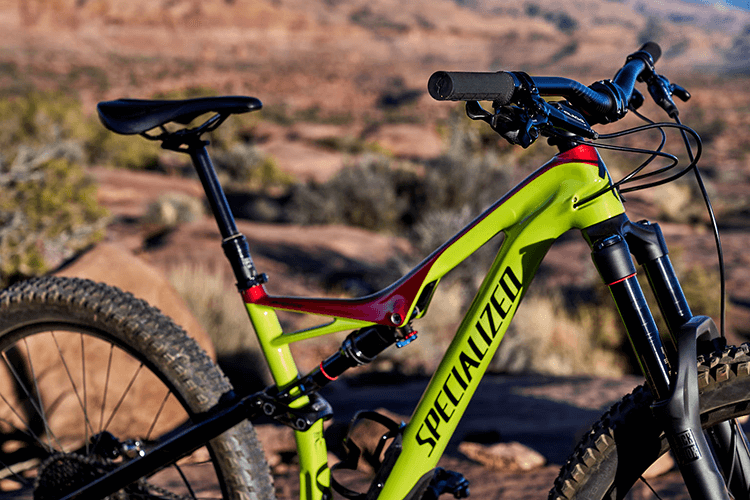 The Shuttle up to the Mag 7 Trails was early and included a few other riders from Colorado taking the opportunity to get out of the snow. I rode Getaway, Bull Run, Arth’s, Little Canyon to the Gemini Bridges Road, out to highway 191 and took the bike path back into town. The Mag 7 trail system is full of fun, quick trails that are sure to fuel your stoke level without being too complicated. The 2017 Specialized Stumpjumper Comp Carbon 6Fattie made it even better by removing a lot of the small bumps in the trail and allowing me to go a lot faster while maintaining a level of control that was unreal. I scored 5 Strava PR’s and ate a bunch of time into my previous rides with the 6fattie. It also helped that it wasn’t my first time on those trails, but really, the Specialized Stumpjumper Comp Carbon 6Fattie with its 3 inch wide tires make riding technical single-track both easy and fun.

I found myself trying obstacles that I had never tried before with the confidence to clean them. Sections that I have been walking long before I even owned a trail bike, I was thinking of riding. The 2017 Specialized Comp Carbon 6Fattie gives you nearly insane levels of confidence, and that could be a challenge if you didn’t know your limits. It’s not the fastest bike from point A to B, but it will remove a lot of the pain along the way, extend your comfort level, and keep you fresh for as long as you are out on the trail. I found myself without energy before I found myself fatigued from the challenge of the trail. If you want to have a grin plastered across your face a mile wide and are not concerned about eating flies or the speed of a cross-country race bike, this bike is for you. If you are new to the sport and want to follow your friends on technical trails, this bike with its 3-inch contact patch and 750mm wide handlebars will give you balance to have the same amount of fun they do. Just remember, It’s always best to get off and walk some sections of trail and ride another day than to get too far over your head and win yourself a one way trip to the hospital. Wouldn’t it be interesting to become a student of the 6Fattie concept and learn how to configure the tire pressures and shock pressures for every type of terrain??Imagine what fun you could have! If you are interested in the full specs, you can find them on the 2017 Specialized Stumpjumper Comp Carbon 6Fattie product archive here.