From the first pedal stroke, I knew that riding the Venge Pro would be different. The Venge’s aerodynamic technology and power transfer were unbelievable.

A little over a year ago I upgraded my 2010 Scott CR1 Pro to an aero road bike, the Specialized Venge Pro Race Force, and a long-standing dream of mine was realized.

I also had the opportunity to swap out the stock Roval CL 60 wheels with the top tier Roval CLX 60 wheels adding ceramic bearings to an already impressive build spec. I had never ridden a Venge before, not to mention an aero road bike, and I have had ample time to put it to the test. 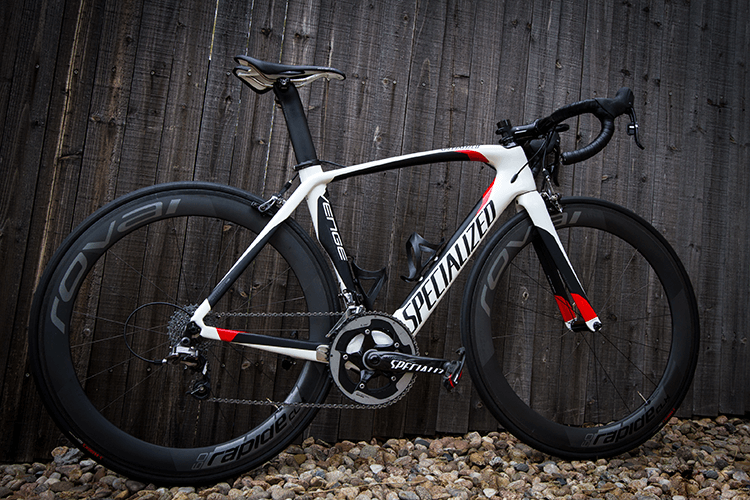 The Scott CR1 Pro was the bike I used to ride 68 miles in 3 hours and 18 minutes completing a goal of mine to break a 20 mph average in 2013. So the new aero road bike with deep carbon rims had some tall shoes to fill. To make things even more challenging for the new Venge, I started a new job which destroyed my daily consistency on the bike and split it into 6 or 7 focused ride days a month due to out of state travel. My size 52 Venge Pro weighed in at 15.84lbs with pedals and cages and looked killer dressed in SRAM force 22 with the upgraded CLX 60 wheels.

From the first pedal stroke, I knew that riding the Venge Pro would be different! I had read all about the bike online but to ride it for myself was unbelievable. I started to rack up PR’s using the Venge’s aerodynamic technology with less effort. The power transfer propelled me down the road and the aero platform sliced through the air. I had to tell myself to slow down so I wouldn’t tire myself out too soon. Oh, but what an enjoyable mistake that would have been! You know, the 2-hour ride out that turns into the 4-hour ride back because you hit the wall… On the flat sections of the road, my cruising speed was increased 2 to 3 miles an hour with the same effort as its predecessor. More speed was available without even searching for it, and the ride felt smooth and composed. Even the occasional chip sealed section didn’t produce the harsh ride characteristics that I had read about. The bike dished out confidence and compelled me to dig deep. 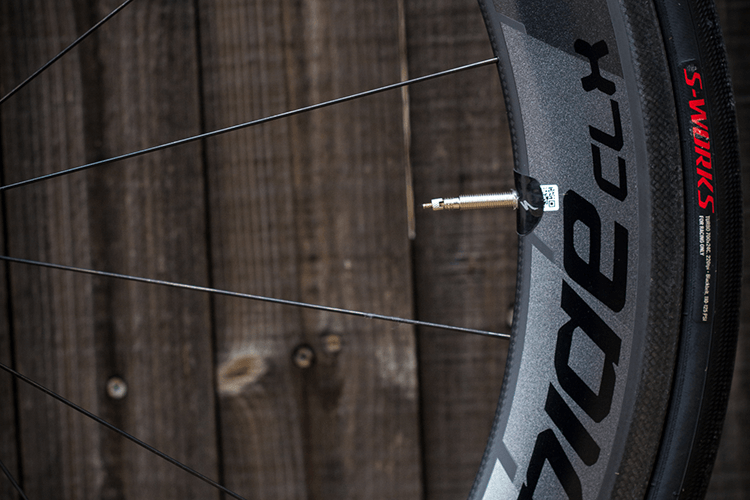 The Roval Rapide CLX 60 wheels were my first ever carbon deep dish wheels. I didn’t even realize they made valve stems that long! The ceramic bearings are amazing, and even now I can spin the wheel and get a cup of coffee and come back with little to no noticeable change in speed. They roll forever! The build quality is excellent and, as I write this, they are as accurate as the day I picked them up. Now, let’s talk crosswind! I am a small guy at 5?6? and 125 lbs. and when the wind starts to blow the wheels are a bit like a kite. I feel like that is a casualty of all deep dish wheels though. Amazingly enough, they are still entirely composed and sturdy, and when you are riding by yourself and hit a crosswind section you will lose your line, but it’s easy enough to readjust. I have been caught in wind gusts 30+ mph and have only had to slow down a bit to maintain control. If crosswinds are the only thing that’s keeping you from these wheels, don’t let it stop you! They will pick up road scuffs from time to time due to debris, but they are strong rims that have held up really well.

The large bottom bracket transfers power to the ground like a beast leaving you to wonder for a fraction of a second just how great the SWorks model would feel, but that quickly disappears when you start closing the gap to the riders you glimpse ahead of you. I’ve read that it’s not a climbers bike, but I found myself faster uphill do to a more efficient power transfer and a stiffer frame. It also has a tapered head tub to assist with power transfer for when you move out of the saddle. I have to admit that I don’t get out of the saddle much as it’s not my style, but if you did you’d have all the tools you would need for an impressive climb. Climbing is an art that has just as much to do with the engine as it does with the technology. But at the end of the day you need to get to the top at any speed you are willing to propel yourself upwards with, and this will certainly get you there. 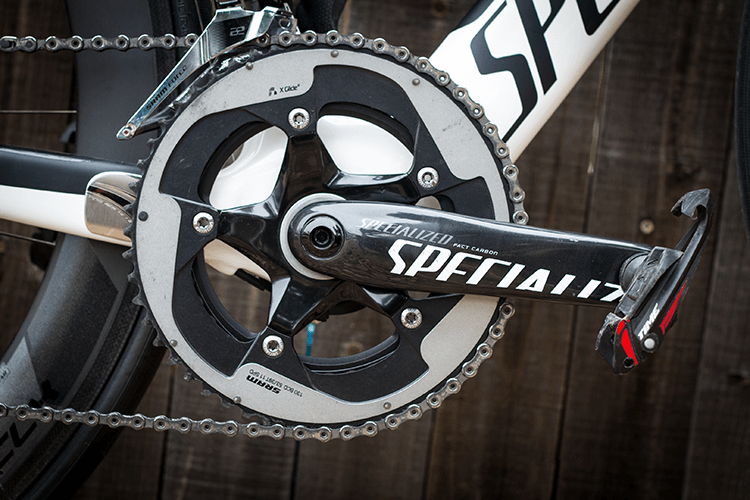 I have learned a lot about resonance and vibrations induced by body position and speed or wind on descents since owning my Venge Pro. A proper fit is paramount with a stiff carbon bike when you’re descending at high speeds with deep dish wheels. I was fit for the bike by my LBS when I bought it, and it has felt super comfortable, but that was until I committed to a downhill on a chip sealed portion of the road on one of my favorite loops. I should also point out that this downhill cuts through a canyon, below a wind, socked bridge, and is a funnel for wind. So, it isn’t too far out of the realm of possibilities that I experienced speed wobbles over 40 mph. Resonance through the front wheel transferred to the front fork creating a vibration that brought on super scary speed wobbles. I also experienced this on a hill in Colorado rounding a corner near Fort Collins in a crosswind but it wasn’t super bad. It could be that I don’ t know how to position myself to descent properly, but I am not super rigid, and I don’t clamp onto the bars when I descend, I stay relaxed and loose.  One time I got the speed wobbles at 42 mph so bad that I had to slow down to 20 mph before I regained control. I ended up working with my LBS, and they dropped the bars a bit lower which immediately resolved the issue. I tested it the next day on the same hill, but I remain hesitant about speeds over 40 mph with this bike for now. Still, the amount of control on the descents and the feeling of composure is terrific; you feel like you can go as fast as you want. I now own an additional Venge, An S-Works Version, with the same fit measurements. I have had the new Venge up to 51.9 MPH with not even a hint of wobbles. Keep in mind that speed carries with it a potential for devastation and carnage to you and others so please proceed at your own risk. 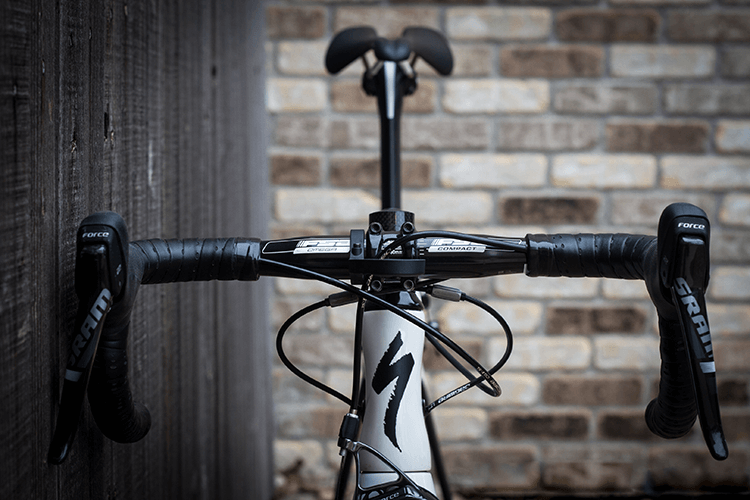 The SRAM Force 22 is a solid groupset. The hoods feel real comfortable, and the action of the levers are smooth and precise. The brake levers have reach adjust, and the transition from Shimano isn’t a huge learning curve. I rarely found myself shifting into the wrong gear on a climb where it mattered or on the flats when I wanted to go faster. The 53x39T crankset with Specialized carbon arms are durable and provide a solid gear range. The rear derailleur is smooth and reliable with little need for adjustment changes. The 11 to 28 Cassette is the only weak part of the spec regarding noise. Every time I shifted down through the gears, there was a clunking sound echoed around me. Operationally it worked fine, but the noise made me feel like it was an after-thought in the build-up of the groupset. I would be interested to know if others have experienced similar clunky shifting and its more a function of tuning. I could see an upgrade to SRAM Red in the future when the opportunity presents itself.

This is the first bike I have owned with internal cable routing, and I have to say that I really, really, really like it. It makes the frame of the Venge stand out visually and also makes grabbing the top tube when you have to haul it a whole lot easier. There is also the added benefit of easier cleaning because there are no cables attached to the down tube or the top tube that will collect the elements. I don’t mind riding in the elements if I have to, but I don’t want to carry a whole glob of the elements back home with me when I do. There may also be a slight aerodynamic gain but the studies I have seen so far relate to a very minimal increase if any. It may just go down to personal choice though, I buy an expensive aero road bike and expect a certain level of refinement in the aesthetic quality when I buy it. That means that I will be looking at things like internal cable routing. When it is all said and done, internal cable routing is really lovely to have on a road bike and is a must-have when the bike manufacturer is promoting the aerodynamic claims of the frame. 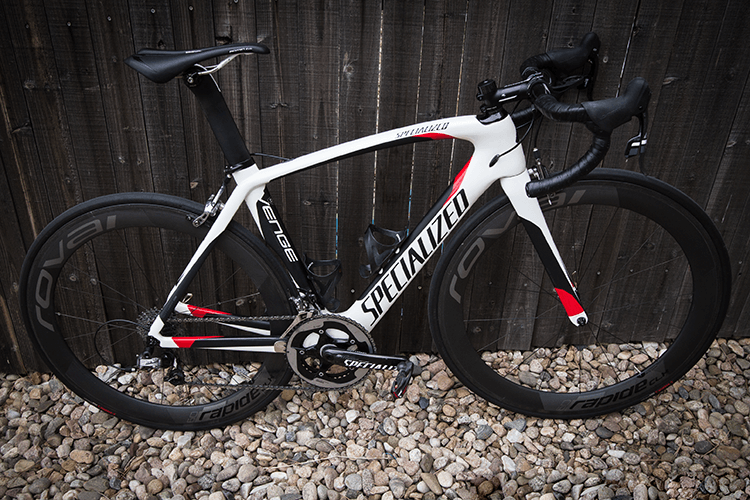 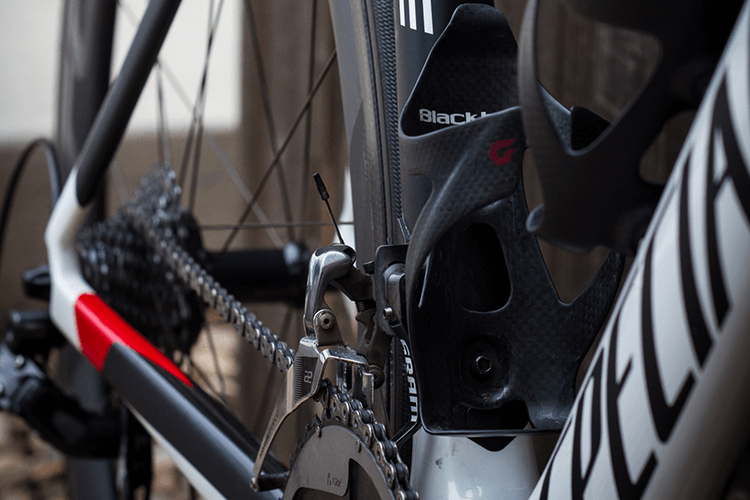 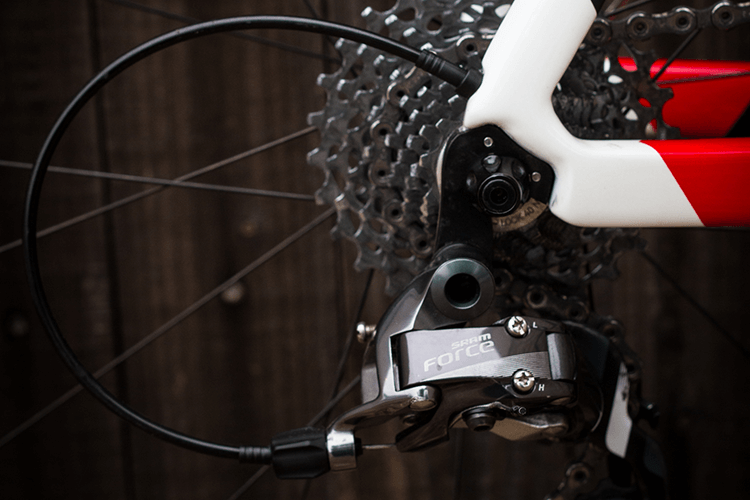 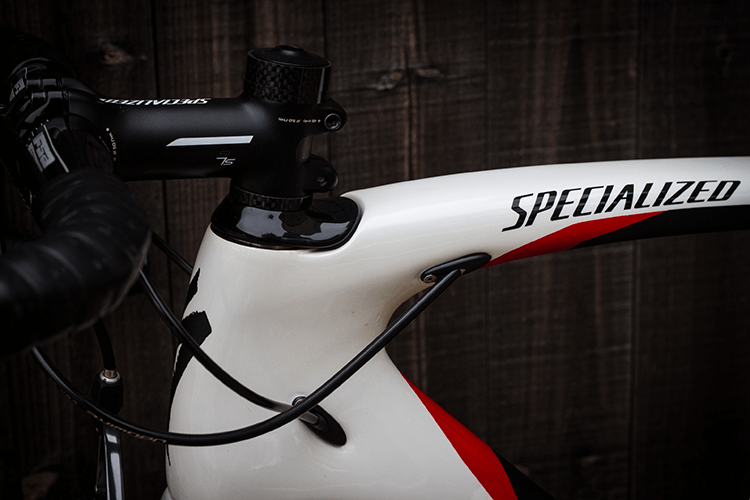 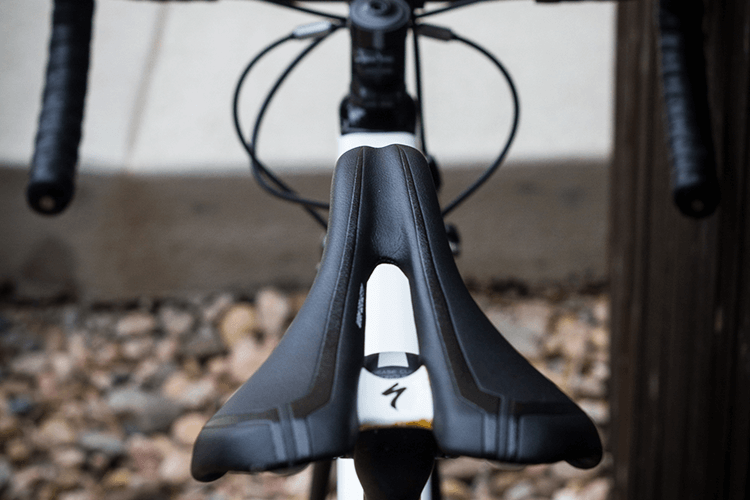 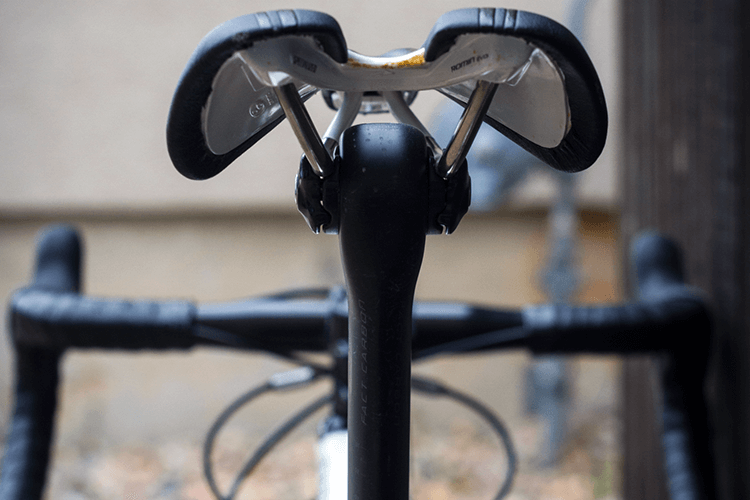 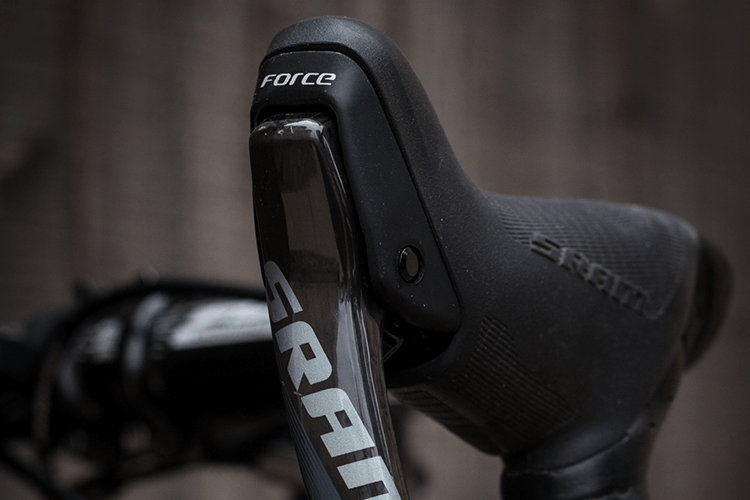 I am really impressed with the Venge Pro! It looks like the business end of a bike race and handles really well without hardly any effort at all. It’s fast enough to live up to the claims of the engineers at specialized. However, I don’t own a tarmac, and I’m not all that familiar with a power meter as I write this. That being said, saving 22 watts over 40kp/hr is a claim I am unable to prove, but riding it at speed has made me a believer. It’s as stiff as it needs to be without being overly harsh. It has remarkable efficiency characteristics and beckons you to ride faster than you thought possible for longer periods than you thought possible. The climbing is fast, and I wouldn’t count it out for a strong finish when compared to its purpose-built brother. It’s equally at home on the descents with the proper bike fit. If you are the type of rider who wants to get from point A to point B as fast and as efficiently as possible, this bike is for you.

Breckenridge is getting dumped on, I have been riding zwift indoors, but this bike seems to be calling me more and more. last season there was some heavy wind in 10 mile canyon crossing the bike path during one of my descents. At 30 mph it moved me close to 2 feet across the path. You do have to keep side wind in mind when you ride this bike but it is still awesome!

…what year model venge is this one featured in this article? ..looks jst like the frame set i got abt a month ago. trying to hunt down all the components to fit it is beginning to become quite the headache!! and now jst the cable stops(mechanical) are the last items needed to complete the build! ..jst not sure exactly what version of the stop kit to look for… any feedback would be awesome!
thnx, Kick

My Venge is a 2014 model year. I have not had the opportunity to take it apart yet. What do you mean by cable stops? could you send me a picture to brian.koehn@crediblecyclist.com. I am out of state right now, but would love to try to help you out if I can. Congratulations on the Venge! It is an awesome bike and I have had an amazing time riding it. it is a really fast, nimble, and comfortable. It spend a lot of time on my indoor trainer right now though. You will fall in love with it when you… Read more »